A tenacious Manchester United led by Marcus Rashford ensured Jose Mourinho’s return to Old Trafford ended in disappointing fashion for the away side as the Red Devils ran out 2-1 winners on Wednesday night.

United grabbed an early lead in the sixth minute when Rashford fired in at Paulo Gazzaniga’s near post, the Argentine’s weak right hand failing to keep the ball from bouncing off the post and into the net.

He would go close again 19 minutes later, though this time the England international’s thunderous shot from outside the box was just diverted on to the crossbar by Gazzaniga. Tottenham had no chances of note as United dominated the opening proceedings, but a piece of brilliance from Alli brought them level, the 23-year-old plucking a ball out of the sky with tremendous control before firing past David de Gea.

However, that gift of a goal for Spurs was given back to United barely four minutes into the second half when Moussa Sissoko brought down Rashford inside the penalty box, the striker cooly passing into the bottom corner, sending Gazzaniga the wrong way for the winning goal.

Solskjaer was under massive pressure ahead of Wednesday night, with some ​reports even claiming he could be sacked if United lost to Tottenham and then Manchester City on Saturday.

Whether or not he needed a result against Spurs, he made a massive call in starting prodigy Mason Greenwood, also handing Scott McTominay a start following the Scotsman’s return to fitness. With Daniel James, Jesse Lingard and Rashford also selected, there was a clear emphasis on getting at a Tottenham defence which has been incredibly leaky in recent weeks. Solskjaer ultimately won the battle between himself and his predecessor due to Rashford’s clinical nature in front of goal, but there can be no denying that United’s pressing throughout the game set the platform for them to go on and win.

Spurs only found pockets of space fleetingly when they occasionally beat the press, and United would have scored more if it wasn’t for a few saves from Gazzaniga.

STAR PLAYER – Not particularly hard, this one. Rashford was electric all night, running at Tottenham’s defenders and constantly putting the opposition on the back foot.

His first goal caught Gazzaniga unawares at the near post early on, while his second was crucial in stopping Spurs building up any momentum following their equaliser before half time.

Rashford is in cracking form at the moment – his goals on Wednesday taking him up to nine in the league this season – and United will need him to keep producing the good if they are to keep climbing up the table.

Rashford is absolutely on one. My word.

Rashford singlehandedly keeping Ole in the job. He’s been sick past couple weeks.

Where else to begin for Spurs than Jose Mourinho? Upon his return to Old Trafford, the former United boss elected to keep faith with the core group of players he has selected in his starting XIs during his brief stint in charge of the north London side. Harry Winks and Lucas Moura came in, but bar those changes it was the same side that edged past Bournemouth on Saturday, Moussa Sissoko moving from the right into central midfield.

However, Spurs were incredibly passive before and after they went behind, with their goal coming only courtesy of some similarly lethargic United defending.

Narrative alone wasn’t enough to carry Tottenham at Old Trafford – instead, their defence was consistently exposed by United’s attack, and Mourinho will know his backline still needs a lot of work, having seen his side concede twice in all four of his games in charge.

STAR PLAYER – Tottenham spluttered for most of the evening, with Harry Kane having minimal impact and neither Harry Winks and Moussa Sissoko asserting themselves in midfield. The only reason they had a sniff in the second half – which evaporated pretty quickly – was down to some 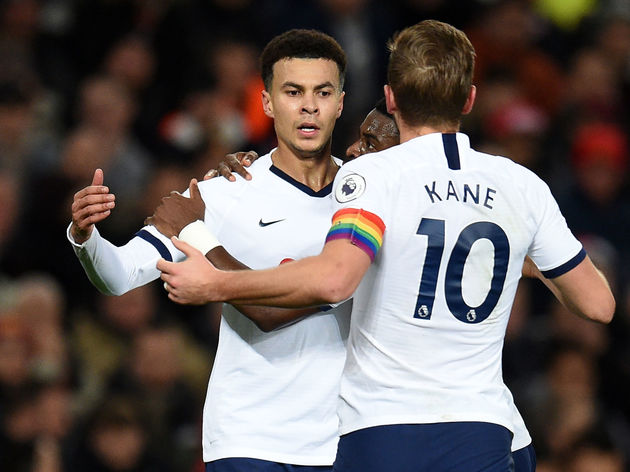 However, despite his goal, Alli was rarely present as an attacking force, with a few neat flicks and tricks here and there the best it got other than the goal for the former MK Dons man.

Still though, look that goal up. Dreamy.

Honestly, that touch from Dele Alli should be on repeat at Guggenheim or Louvre. Pure class.

It’s a quick turnaround for both sides, with the two teams set for games on Saturday. ​United visit the Etihad to face ​Manchester City, while ​Tottenham will take on ​Burnley in north London.